Pablo’s grandfather began his business in shoe repair over 100 years ago.  Since then Pablo’s family has grown into one of the largest shoe repair families in the world, with many family members including aunts, cousins and uncles also carrying on the tradition.  Pablo himself first learned shoe repair in his father’s shop which opened in 1980.

Pablo learned from his father and wanted to follow in his steps and continue the family tradition. Pablo worked for many years to master the art of shoe repair, eventually taking over the shop as his own and beginning the story of the third generation of Pabloes.

And for patrons of the shop, who have been coming for many years, they will remember the days when Pablo’s father was running the shop.  Pablo looks at all of you as friends and takes great pride in keeping your shoes looking great. 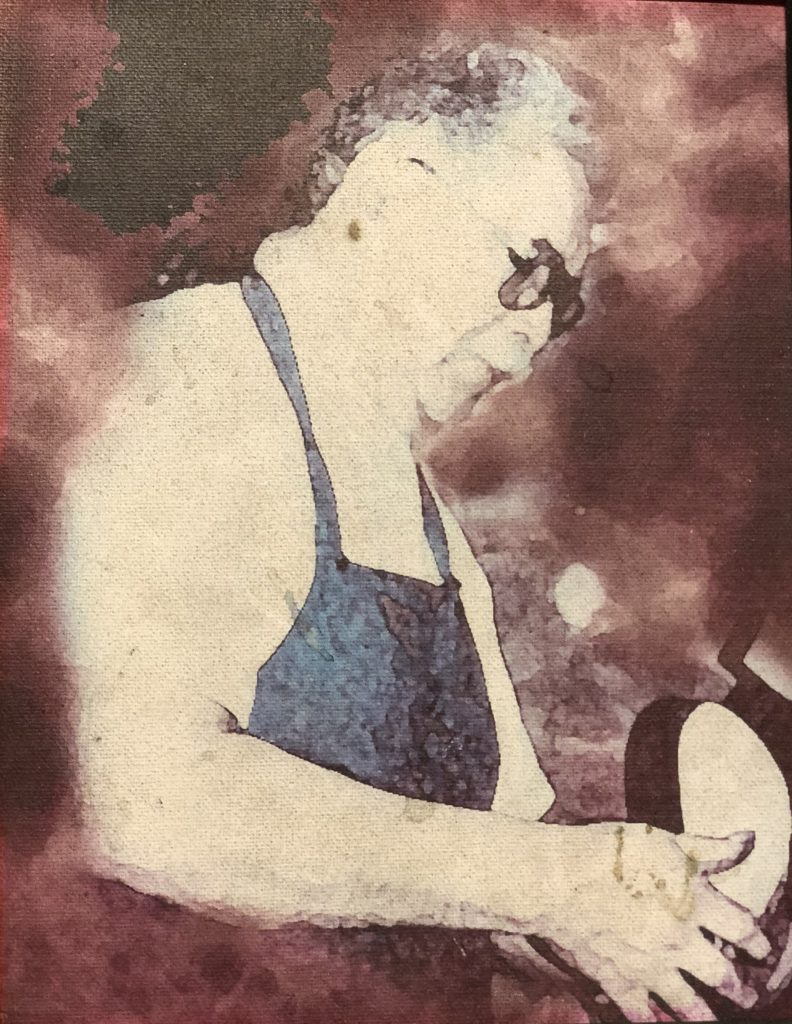 Pablo carries on the traditions of his father and grandfather, who were both also named Pablo.

An Old-Fashioned Cobbler, Shoehorned into the Present

Thursday, Jan. 29, 2009 | On a drab Monday in need of a buff, five pairs of shoes wait for a shine. The eighth broken heel has just arrived; one more for the crowded racks where Dior rubs soles with no-name boots and Birkenstocks bump stilettos.

Inside the small shop on the edge of San Diego State, Mexican music rises from a computer that sits among historic stitching machines by Singer and Landis. A folk mask leers in their shadows, tucked low on the wall. The odor of glues and dyes pierces the air. In the back an employee sands and buffs, moving quickly between bench and machine. 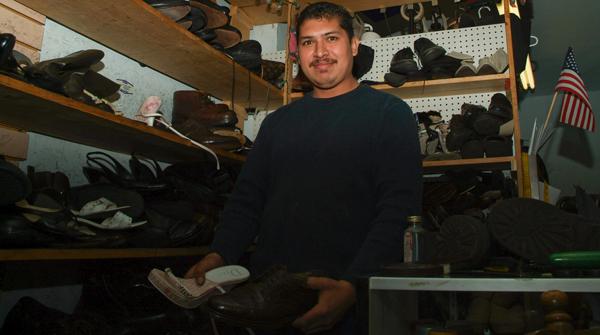 “How did you hear about us?” Pablo Serrano asks the girl at the counter.

The business has been here for 48 years, Serrano tells her as he hands her a receipt. She can call Friday to see if the shoes are ready.

Out on College Avenue, an employee stands waving a big sign, reminding passersby that one of the oldest professions is still kicking over on Montezuma Place. Pablo’s Shoe Repair may be a stone’s throw from a huge captive audience netted by traffic stops, but the overgrowth of sprawl hampers its visibility. Still, the passage of time hasn’t left the work of the cobbler irrelevant.

“Every day is different,” says Serrano, describing the work of repairing shoes. He also fixes and cleans luggage and handbags. The workflow varies too, with days in which he has fixed up to 40 pairs. Everything from police and military boots to casual sandals. San Diego State adds to his customer base — “more staff than students,” he says. President Stephen L. Weber brings in shoes and belts. And at least one customer brings him steady work in the form of designer shoes she fixes and resells on eBay.

He plucks a pricey Ferragamo heel off a rack. “It costs $7-$10 to fix,” he says, while buying a new pair costs several hundred. The uppers are so well-made, the shoe has a much longer life than the heel, he points out. It’s true for less costly heels, too. “Most of the girls here at SDSU wear them down to the metal.”

In the back of the shop lies a tangle of tools and machinery that overlap like the guts of an engine. Serrano stands at a workbench and demonstrates one of the jobs that accounts for a good deal of their work. His repairman, hands him a tenasus — a heel puller. After opening the tip of a high heel he plucks out a screw, then shows how he sands the heel to restore its shape. The “finisher” — a big whirring machine — provides the final touch. Another common job is an upgrade on a half sole (the portion just below the heel). He uses a screwdriver to open the sole, then sands and surfaces.

Two years ago he took over the business for his father, who bought the store in 1982. Pablo Serrano Sr., who still works sporadically, isn’t in today but. He confessed that he’s tired of working. He wants to retire. That day may not be coming anytime soon, however, thanks to a divorce dispute years ago, when his first wife confiscated his proof of citizenship. Without his alien registration number he can’t collect social security, he says. The ensuing paper chase has led him from a hotel on El Cajon Boulevard to a records bank in Nebraska, retracing his own path to citizenship, which was finalized when he passed the test in 1972, he says. After rattling off a list of the things he’s done in the name of the missing number, Serrano Sr. marvels at the fact that he’s worked in the United States. since he graduated from Mar Vista High School, has 20 grandchildren born here — yet a cloud hangs over his citizenship.

The Serranos are cobblers, a craft passed down at least since Serrano Sr.’s father. It’s an occupation requiring “dexterity and mechanical aptitude, as well as some artistic ability,” according to the Labor Department. It may sound like a medieval trade — indeed its tools look, sound and smell like yesteryear — but in the dark ages of the new economy, shoe repair is the business equivalent of refurbished wingtips. More people are opting to fix rather than toss their old shoes, it seems. According to various reports, including those of the Shoe Service Institute of America, the industry is experiencing its own renaissance — though it may also have to do with the fact that there are so few such shops left. While there were more than 100,000 in the 1930s nationwide, today there are only about 7,000.

Five San Diego repair shops closed in the past two years, Serrano Jr. notes. He says it’s hard to know if the current spike in business is a result of the economy — or if he owes it all the sign-waving. “I started the sign again when the economy started going down,” he says. He thinks it’s been over a year, but an employee reminds him it was only six months ago.

In addition to surviving the tanking economy, the historic business is in step with the green economy, as well. His shop helps keep old shoes out of landfills; it keeps old machinery in use; and it takes up less space than a miniature parking lot.

Serrano began learning the trade when he was 10 by accompanying his father to work on Saturdays. He couldn’t stitch, patch or even spit-shine; he was there to observe, his parents advised. “My mom told me just to look at him — not to bother him,” he says. It took 4-5 months to learn how to use the sanding machine, but his motivation grew when a neighbor who sold shoes at the swap meet offered him $1 per pair for simple refurbishing. She would give him 30-40 pairs at a time, he says. As he got better, “I started charging $4 a pair.”

His father, he insists, doesn’t really want to retire. “Oh nooo,” he says. “This is therapy for him.” He points to an unusual piece of equipment resembling an industrial sewing machine. It’s called a McKay. It was created in the 1800s by inventor Gordon McKay, whose inventions revolutionized the manufacture of footwear. “Not every shop has it,” he says. “It’s very expensive.” It stitches the inside of dress shoes, he says, picking up two different shoes and turning them over to illustrate. One has stitching on the bottom; the kind the machine can repair. Serrano says his father works on it in the mornings, then takes the shoes to his brother’s shop in Grossmont Center.

The fact that it’s a family business means the little shop with the handmade sign and prime location won’t be readily unseated, come depression or new developer vision. Gentrification projects have been threatening to shut them down forever, the son says. “When my dad moved here they told him he had a few months to stay. It comes and goes. Every 4-5 years, the same story … but it never goes through.”

And if it did?

“We would just move.”

Sheila Pell is a San Diego-based freelance writer. Please contact her directly at spell07@gmail.com with your thoughts, ideas, personal stories or tips. Or set the tone of the debate with a letter to the editor.